Getting a tattoo is a big deal. It’s permanently on your body for the rest of your life (unless you get one removed, obviously). It’s something that a lot of people put a lot of thought into getting… most of the time.

Whether you are going to a NASCAR race and seeing fans with Dale Earnhardt tattoos or to a KISS concert and seeing Gene Simmon’s tongue tattooed on someone’s bicep, fandom tattoos are something that people get to show that part of their life that means so much to them.

Yes, there are even Backstreet Boys tattoos.

If you’ve seen the closing credits for the boys’ documentary, “Show ‘Em What You’re Made Of,” you might have seen one that belongs to Colorado fan Shannon Sour.

“They helped me realize that things in life will be a struggle but you will always survive to beat the outcome,” Sour said about her tattoo that honors the Backstreet Boys and the television show “Supernatural.”

“I got it on this arm because it's where I tried to commit suicide,” Sour said. “I felt I needed to put something there that helped give me that purpose in life. It may sound silly or stupid to many but in my eyes music can save lives. At that time it was Backstreet Boys and Supernatural that helped me through my harder times, and it gave me the lift that I needed. Because of that, I'm happy and I'm still here enjoying life.” 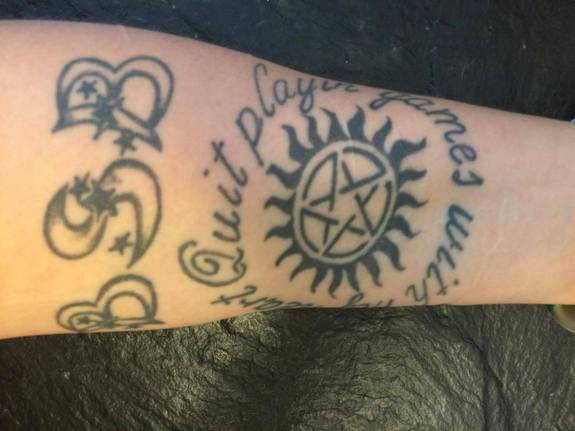 Other fans have also inked themselves because of similar feelings.

Nicole Meighoo of Toronto, Canada, got Kevin Richardson’s autographed tattooed after asking him to sign her at a VIP because, in a way, he saved her life by discussing health.

“I have 3 tattoos and this one means the most to me,” Meighoo said. “Kevin has always been a big inspiration to me. He's one of the main reasons why I’m still on this earth.”

Meighoo said that when she first felt sick years ago, she didn’t know what was wrong with her, but it was Kevin on television that changed everything.

“I saw Kevin on TV talking about getting your colon tested. (I) got tested and it really saved my life,” Meighoo said. “I've always wanted to get this type of tattoo, but when Kevin left the group, I didn’t think it would ever be something that would be possible.”

Thankfully, Kevin came back to the group and during the “In A World Like This” tour in 2013, Meighoo drove 20 hours from Toronto to Missouri and asked him to sign her arm during her meet and greet.

“I drove back home another 20 hours and got my ‘permanent stain’,” Meighoo said. “This tattoo is my daily visual of how much I love and appreciate Kevin.” 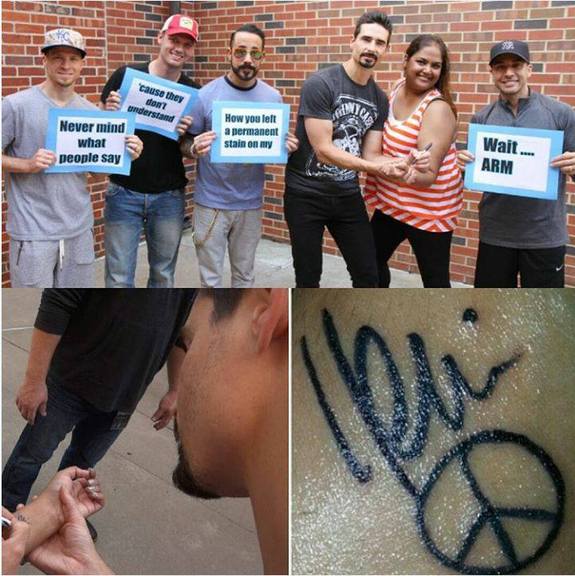 Canadian Melissa Gushnowski had lyrics from “Show ‘Em What You’re Made Of” tattooed on her body for a special reason.

“I got it after I decided I deserved better,” Gushnowski said. “(My daughter) Madison deserved better and I left my husband. I knew I would and will survive.” 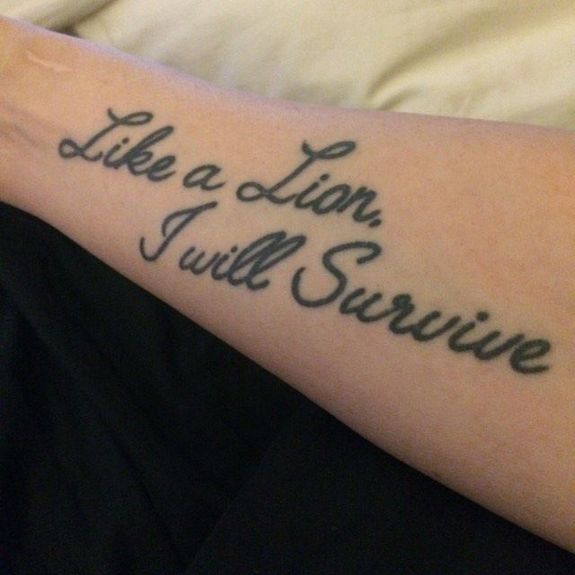 Mara Sansolo from Florida had the title of one of the most sentimental Backstreet Boys songs tattooed on her shoulder out of respect for her mother and grandmother.

“Mom died in 1999, but loved Backstreet Boys,” Sansolo said. She died during the 1999 VMAs, and our theory is that she waited just long enough to see the Boys perform that night.”

Sansolo and her family played “The Perfect Fan” at her mother’s funeral.

“Grandma passed in 2010 and probably would not approve of something relating to her being tattooed on my body for all of eternity,” Sansolo said jokingly. 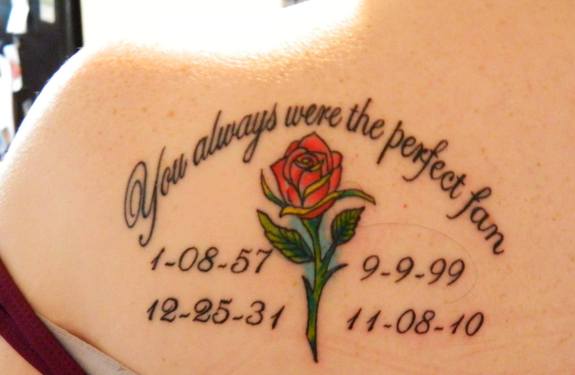 For Christel Marshall of Washington, D.C., her Backstreet Boys tattoo wasn’t her first one but celebrated her first time in Las Vegas with a tattoo.

“When my brother said, ‘We're in Las Vegas, we have to get tattoos,’ I knew exactly what I wanted,” Marshall said. “It's a mantra we all (fans) live by. I like that no one will immediately know what it means unless they ask me.”

Marshall said the tattoo artist thought “KTBSPA” was her and her brother’s initials, but said that if people know what it means, it shows they are a part of the ‘pride.’ 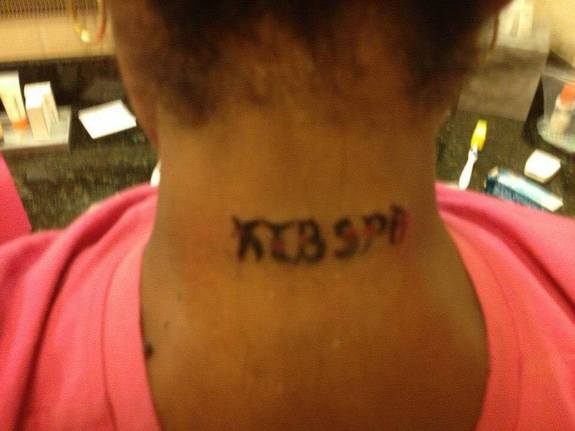 For Michelle Waits of Georgia, she can get her Backstreet-related tattoos for free - her husband is a tattoo artist.

On top of having a tattoo that looks like one that Nick Carter has on his leg, she also has his autograph tattooed on her.

“My husband helps me out with ideas,” Waits said. “I have loved the Backstreet Boys since I was 12 years old and I love my BSB/Nick tattoos.” 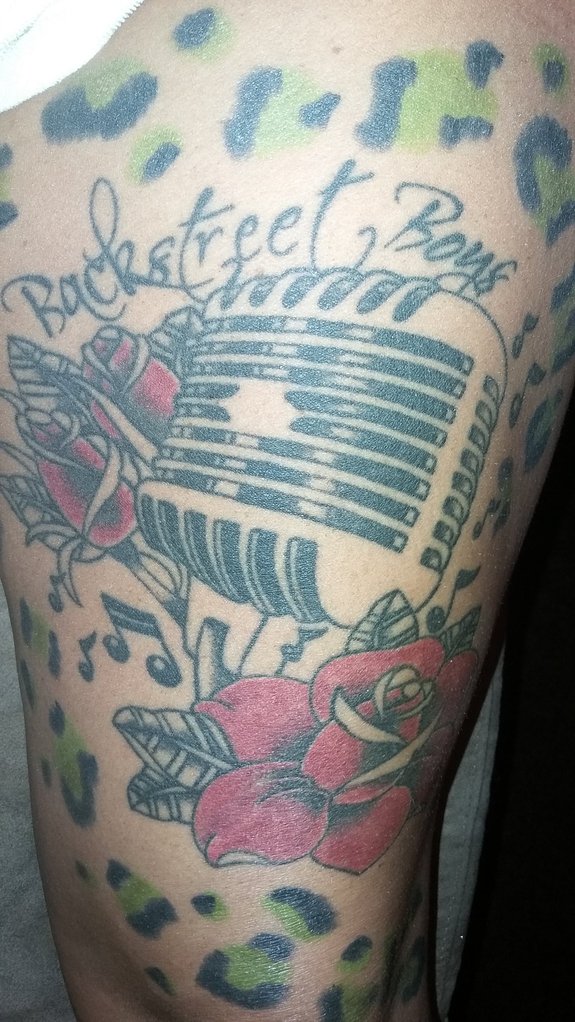 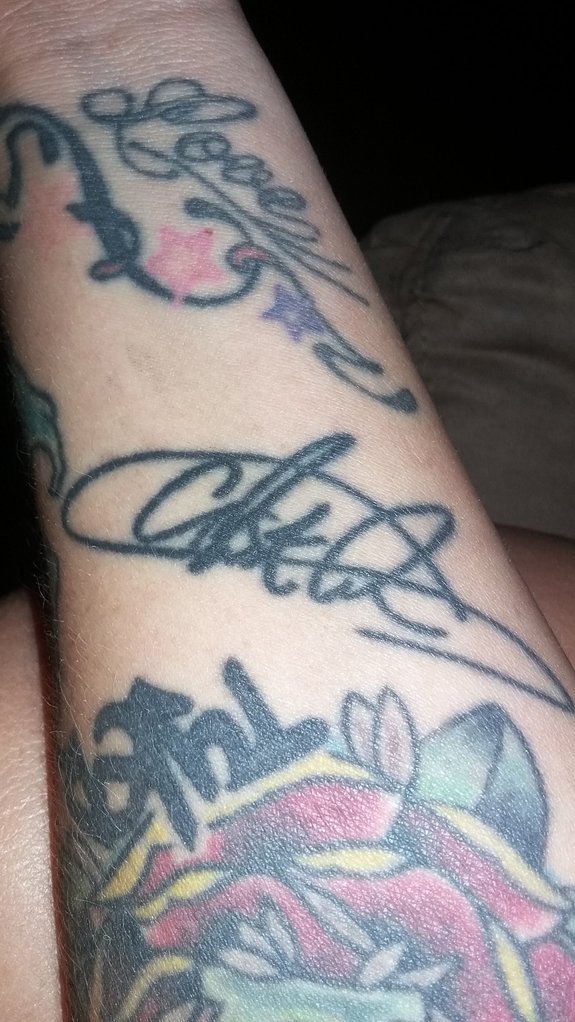 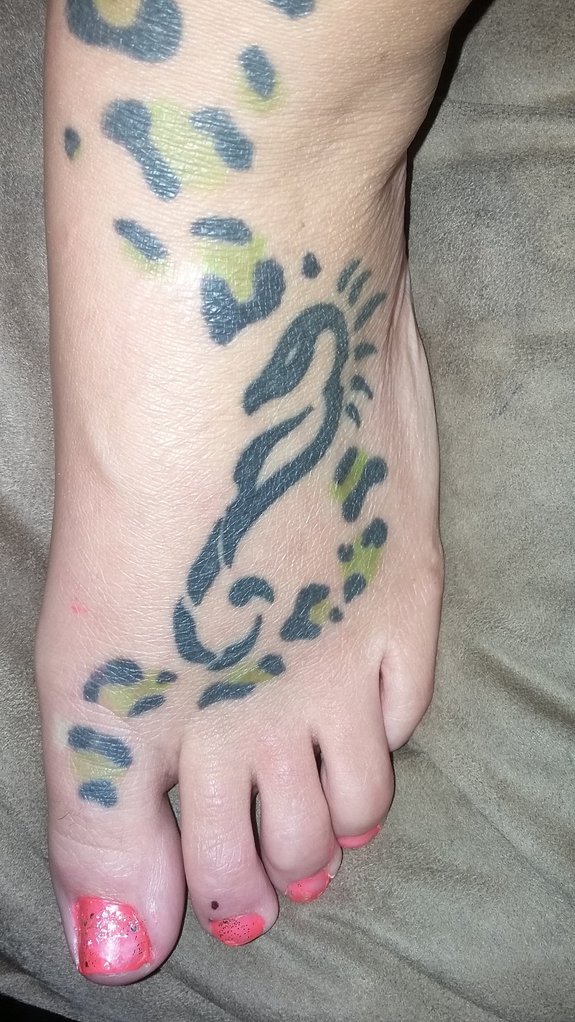 Annette Perez from Colorado has what is probably one of the biggest Backstreet Boys-related tattoos… their faces on her back.

“I did it to have memories, when I'm 80, of the tours, friends, music and of course how amazing the guys are to us,” Perez said, who has had her photo taken with Brian Littrell pointing to her tattoo. 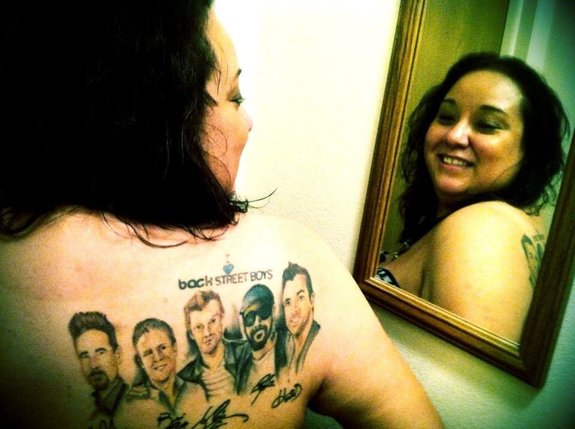 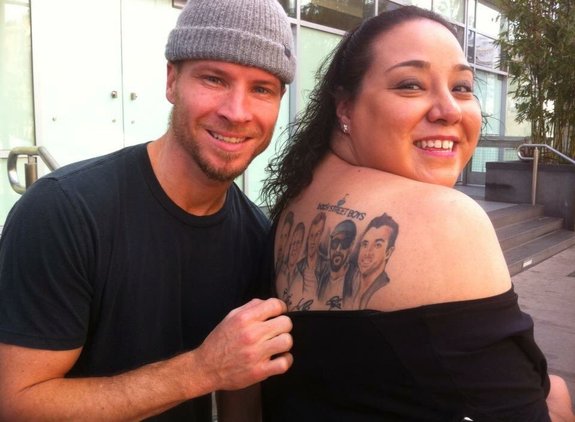 On a personal note, this Backstreet Boys reporter got her first tattoo recently and it was in honor of the Backstreet Boys because without them, her life would be incomplete. 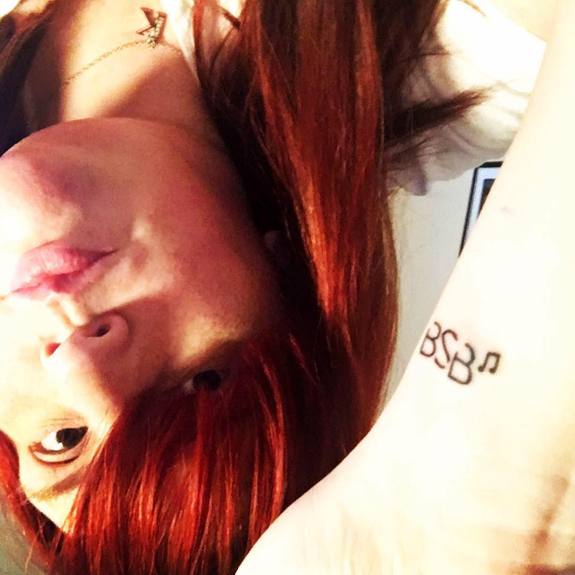 So whether someone’s tattoo is a BSB lyric, one of the guys’ signatures or even a logo or slogan associated with the group, Backstreet Boys fans are keeping the Backstreet Boys pride alive.

They have certainly left a permanent stain on fans’ hearts… and bodies. 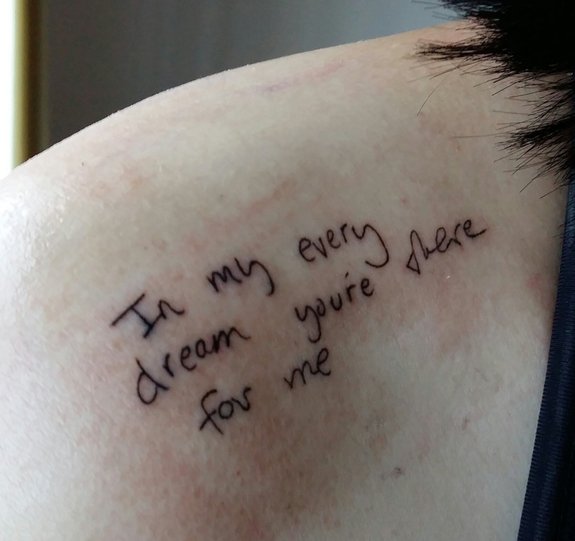 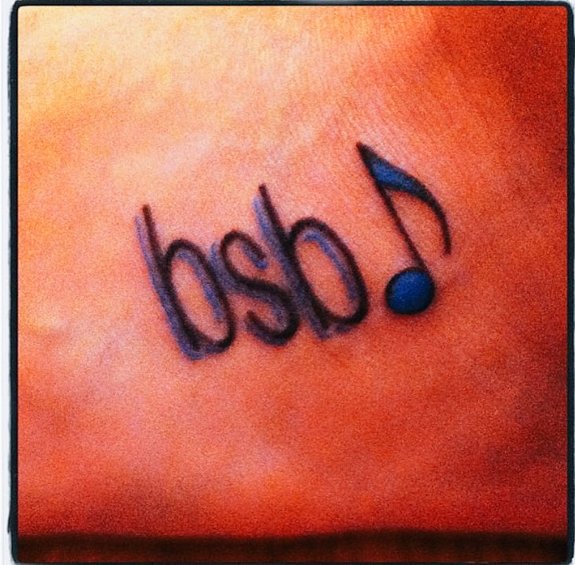 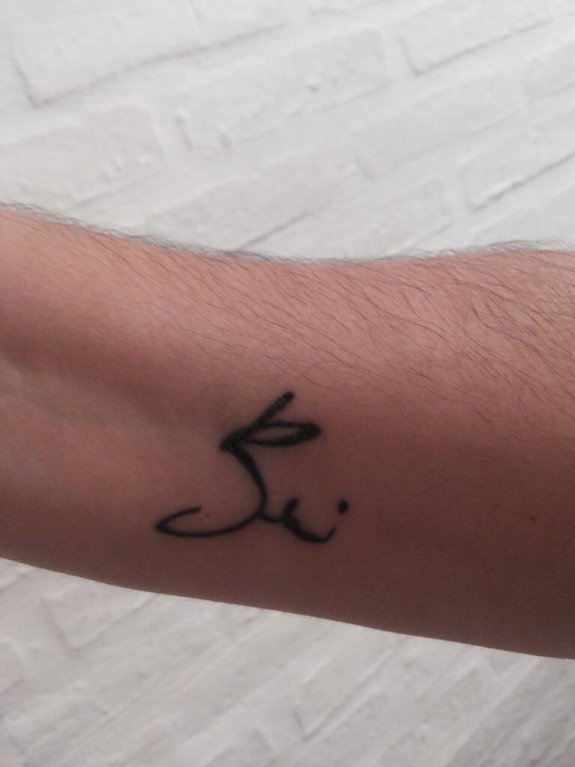 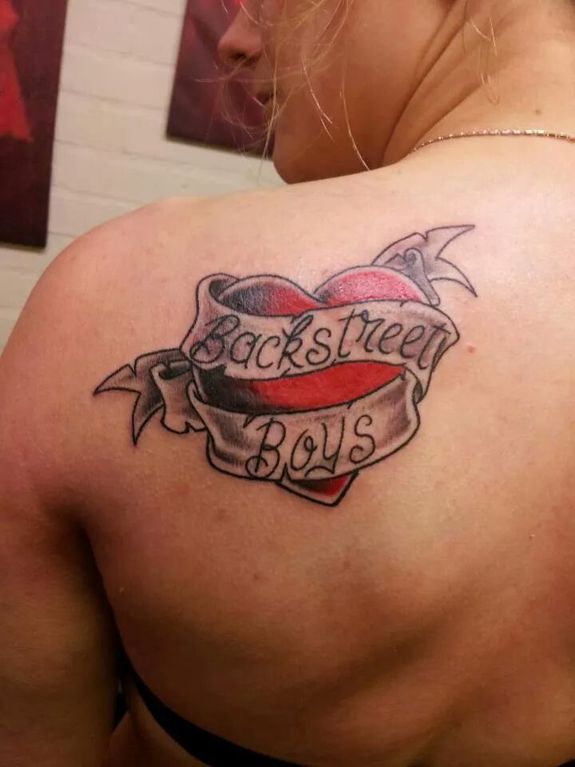 -----
Do you have a Backstreet Boys-related tattoo? Share your story/photo here!