Grab some popcorn because Howie and his 8-year-old son James take on other celebrities and their children in this week’s hilarious episode of Big Star Little Star!

The pair took a mini-vacay out to Los Angeles, California, to film the new USA Network series, which saw them competing against actress Teri Polo and her daughter, Bayley, and baseball star David Ross and his son, Cole, to see which parent-child team knows each other the best.

“We had a little father-son trip which was cool as he was born out there many years ago at Cedars-Sinai,” Howie tells us. “I took him down to Hollywood Blvd, and we just had a great father-son weekend.”

“I can’t wait to see James on TV,” continued Howie, who is spending some downtime with his wife Leigh’s family in New Jersey before resuming BSB’s Larger Than Life residency at Planet Hollywood’s AXIS Theater in Las Vegas on June 15. “We’ll watch with our in-laws -- get out some popcorn, have a good night and a chuckle at it!”

Howie recently told ET that James already has the showbiz bug and wants to follow in his footsteps to become a singer. Having launched his own YouTube channel, James the Great, he’s also itching to get back on the road with the boys.

“He’s on his second passport now -- the first one is full from traveling all around the world with us. That’s why I think he’s so good and so sociable. He’s always around a lot of people and very easy to hang with. A year or so ago, he said, ‘Hey dad, when are we getting on that bus again?’ He loves going out on the road. It’s a like a kid in a candy store on the tour bus -- a house on wheels! He’s my little road buddy.”

Speaking of road buddies, there’s lots of little friends for James on tour these days, with all of the group now doting dads, whose families frequently join them on the road or in Las Vegas.

So, which Backstreet kids are James and his 3-year-old brother, Holden, closest to?

“Kevin’s kids because they’re closest in age. They actually came down here on vacation with us a little while ago. My boys totally gravitate towards them because of their age -- and because they’re boys!”

While appearing on Big Star Little Star, Howie and James were asked to choose a charity for any money they win, with the pair choosing Lupus L.A.

in honor of Howie’s sister, Caroline, who died of the disease in 1998.

Following her death, Howie created the Dorough Lupus Foundation to help raise money and awareness of the illness.

“I’ve been blessed for so many years with this wonderful career, so it’s about giving back as well,” he says. “My foundation was created in memory of my sister, Caroline, and we’re not so active right now, but I do try to support a lot of organizations out there like Lupus L.A. to help bring awareness and carry on her memory. It’s crazy to see how much progress has been made with the research of the disease. When I started the foundation, lupus wasn’t really on the map and now it’s something people talk about, so I’m proud to have helped bring that awareness to light and show my support.” 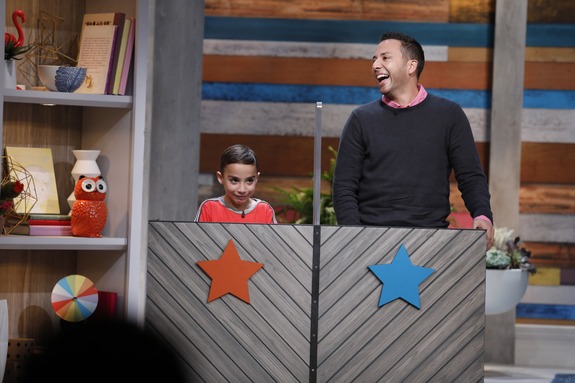