ENTER TO BE JULY'S SOLDIER OF THE MONTH HERE

There has been so much excitement in Backstreet Boys land the past few months with the release of their Top 5 country hit, “God, Your Mama and Me” with Florida Georgia Line, the Las Vegas residency, radio shows, and various TV show appearances.

Even with all of that, we still have so much more to look forward to.

For Carrie Graham, a licensed banker from Omaha, Nebraska, she’s ready to see something that’s more than just more Vegas dates or the new album.

“I am looking forward to seeing the world fall back in love with the boys,” Graham said. “I know the core fan base has never wavered, but it’s nice to see mainstream media supporting the boys again. It’s so much fun to see them headlining big concerts and getting the props for all they have done for so many years.”

Graham’s enthusiasm for all the attention the boys are getting and will be getting in the coming year is why she is the June 2017 Soldier of the Month.

While she does want some new music that will help capture new fans, she thinks the Backstreet Boys are doing exactly what they should be doing to keep the momentum going.

“(They could) use the ‘nostalgia bug’ that so many of us have to help build more fan base,” she said. “It's also great to see the boys show how they have grown - both as fathers and family men.  It makes it easier for the world to relate and see how amazing they are.”

But since the boys are recording a new album, what kind of music would she like to see the boys do?

“I am admittedly not a country music fan,” Graham said. “I would like to hear more pop with amazing ballads. I love when they let their voices shine. I would love to see a catchy up-tempo song (i.e. “Get Another Boyfriend”), then hit us with an amazing ballad! Show the world their talent is here to stay!”

Now get to know this month’s featured soldier a little bit better.

Where are you from? Originally from South Dakota. Currently living in Omaha, Nebraska

What do you do for a living? (job, etc.) I am a licensed banker.  I help people with general banking, financial planning, and loan needs.

Tell us a little bit about yourself:  I'm an only child, whose parents were also only children. I graduated from the University of Nebraska (GO HUSKERS) with a B.S. in Sociology.  I love the Huskers as much as I love the boys! I have two dogs - Chase and Harley -  who are the loves of my life and my partners in crime! I love to travel, and meet as many people as I can!

How did you become a fan? My friend Nicole was hanging out with me and said you have to listen to this CD I got called “Backstreet Boys!” That’s when the love affair started. I blame her for the monster she created and all the money I've spent over these years on BSB.

What is your favorite BSB memory? My favorite memory with the boys is back in 1999 on the Millennium tour.  My mom took two of my friends and me to see them in Kansas City. We were surprised and excited when we saw the tour buses in the morning when we woke up at our hotel. At breakfast, we asked our waiter if the boys were at our hotel, to which he replied he could neither confirm nor deny.  When it came time to pay the bill, he slipped a note that said, "they are here"  He then said we might want to be around the lobby at 2 p.m. We were ecstatic! The BACKSTREET BOYS were here!

We sat in the lobby with some other fans staying at the hotel as we were all guests. We were talking about how amazing they were.  When a man walked up and asked "hey, did you girls want some autographs or a picture" to which I replied "Yeah, when the boys get here we will" to which he responded "ok" and gave me a funny look. It was then that it hit me, and I looked at my friends and said, “Oh my God, it's HOWIE!” We jumped up and said. "Yes, we do!" He took us out to the parking area where sweet Howie took photos and signed everything we put in front of him. Brian and Nick came out and waved as they walked by, AJ came out, but we weren't able to see him. The vans pulled away, and that's when we saw Kevin inside. We ran back in and Kevin took photos and signed things for us as well. We couldn’t believe it and we still had the concert to go! Afterward, we ran upstairs to tell my mom (we couldn’t get the key to work because we were so out of breath!).  My mom just looked at us and said, "You are kidding me, you got to see them and I was taking a shower!" It was seriously amazing.

I got to thank Howie personally a few weeks ago in Vegas, for being so awesome to stop and make sure that we didn’t miss them which we would have if he hadn’t said anything.  Many stars who are as successful as Backstreet Boys, especially with as big as Backstreet Boys was during the Millennium tour, they would have just snuck by, but not  Howie. That kind gesture just made me love the boys even more!

What is your favorite BSB song and why? “Take Care,” “In A World Like This,” “If You Want It To Be Good Girl (Get Yourself A Bad Boy)” – This is the song that made me a Backstreet Boys fan.

What is your favorite BSB video and why? “Show me the Meaning of Being Lonely” (even though I cry every time)

Who is your favorite Backstreet Boy and why?  I’m an equal opportunity lover of the boys but I am a Nick girl at heart!

How has BSB impacted your life? They mean so much to me I can’t really begin to explain! I lost my parents a couple years ago, and it was then I realized just how important the boys were to our lives.  My dad was a motorcycle-loving computer guy and while we got along great, we didn’t have much that we could really do together to bond over.  One day I told him that I wanted to try to start a Backstreet Boys website and would he help me.  We spent hours working on the site together, while nothing much ever became of the site, it gave us a closer relationship!

My mom was the one who always took us to the concerts. The boys never came to South Dakota, so we had to travel to see them! Mom figured if you can’t beat them, join them!  And that we did!  My mom became a huge fan, and loved the boys just about as much as we did!  She knew all the songs and would sing and enjoy the concerts! My mom was a Kevin and AJ girl, she loved the “bad boy” as well as tall dark and handsome boys! (My dad was tall and had dark hair and he was kind of a rebel since he had motorcycles-my mom had a type). I have so many amazing wonderful memories of my mom and dad because of the boys! Memories I will never forget.

The other HUGE way they impacted my life is after I lost my parents I began to gain a lot of weight. It was a struggle, doctors were concerned with my high blood pressure, and heart attack risk at only 29 years of age. Both my parents passed of heart attacks, so it was imperative that I do something about my weight.  Then, I flew down to visit my grandmother in Florida, and I almost had to ask for a seatbelt extender because I couldn’t fit in my seat. It was then I realized my weight was out of hand. I knew I was going to be flying to Europe for the BSB cruise in 10 months and would be miserable.  I then decided to make a drastic change.  Two months later, I went under the knife for bariatric surgery. In just seven months, I was down 77 pounds and under 200 pounds for the first time in several years. I went on that cruise with a renewed sense of self!  I have continued to lose weight and have achieved the goal of 110lbs lost and now only weigh 162lbs!  I have been celebrating the weight loss, and better health by taking many Vegas trips to see BSB! Knowing I would see BSB and have a photo taken with them, has kept me motivated to stay with this healthy lifestyle.  Being with the boys is a dream come true, and I wanted to look my very best and feel good! BSB helped me achieve that!  They have impacted me, and my family in so many amazing ways that I feel I can never repay them. Although, I am trying with all of my trips. LOL!

I see that you've already been to Vegas to see the guys. What did you think about the show?How many Vegas shows have you seen so far and are you planning on doing more?   I have been lucky enough to travel to Vegas several times (it helps that I am single with no kids!). I wish everyone could experience it, as it's really something to behold! The show is everything that we fans have become used to, and so much more! I am going back June 28, 30 and July 1 for the last shows (for this run ) it will be my sixth, seventh and eighth shows! I am so lucky to get the opportunity to experience the show so many times. And what's better is that I get to experience it with my friends! 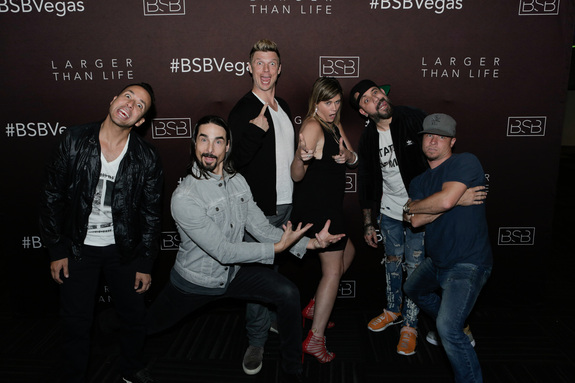